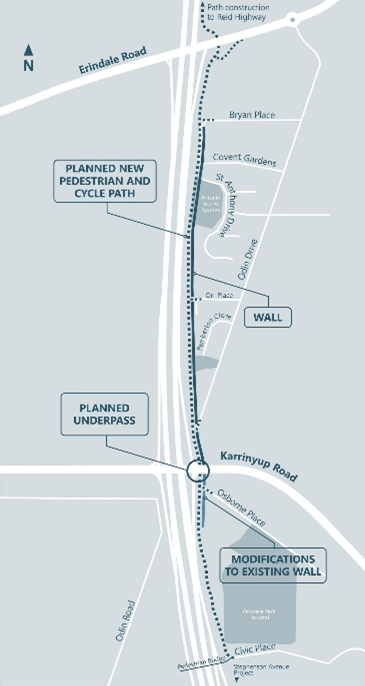 As part of the West Australian governments long term cycle network plan, cycle paths across the city are being upgraded to separate cyclists and pedestrians from roadways. These upgrades improve safety for cyclists, pedestrians and road users whilst improving travel times and encouraging people to get on a bike and be more active.

One of the major upgrades taking place is along the Mitchell Freeway from Cedric St in Stirling to Erindale Road in Balcatta including a new underpass at Karrinyup Road. The new PSP (principle shared pathway) is replacing a section of the existing path that requires cyclists to use side streets and narrow paths and will eventually link into the PSP at Hutton Street and on to the city.

To pass under Karrinyup Road a new underpass is being built for the PSP to dive under the road. Whilst any road works are disruptive, cutting an underpass under a major arterial road is more disruptive than most, not only for vehicles but for data too. With Main Roads fibre optic network linking traffic lights, cameras, overhead message signs and smart traffic monitoring systems running straight through the underpass location there was need to relocate the fibre network.

Lightspeed Communications and Electrical were engaged by Decmil Southern to reroute fibre optic cables around the underpass area and cutover services to the new cables with minimal disruption to the Main Roads network. To plan the cutover, Lightspeed technicians and project managers worked with Decmil and Main Roads to inspect the existing fibre optic network and plan fibre optic splicing and testing up and down the freeway.

With the need to keep disruption to freeway traffic to a minimum Lightspeeds team of technicians worked through the night to replace fibre optic joints and then cut and splice fibres to bring services back up as quickly as possible whilst also testing from multiple locations throughout the city.

As with all major changes to networks the shorter downtime the better and this project was no different with major links back up and running within 2 hours of the first cable cut taking place and all fibre works complete within the planned 12-hour outage window with all connections up and running.

Lightspeed Communications and Electrical are proud to again be part of a project that will benefit the community for many years to come.